It’s the flavour-filled drug fix for millions around the world and has been powering the workforce since its discovery in the 10th century, so thank goodness for coffee being a 21st century global commodity; how on earth would most of the planet even function at 9am on a Monday morning?

Luckily for planet earth, specialty coffee is grown all around the world in what’s known as the coffee belt.  This region spans from the Tropic of Cancer (approximately where lies southern China, Mexico, India and Egypt) and the Tropic of Capricorn (Australia, Chile, Brazil, northern South Africa), with the equator at its centre. 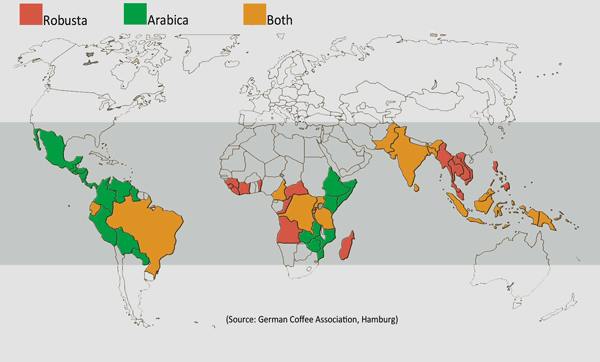 This belt across the centre of the planet, with perfect growing conditions due to the planet’s relationship with the sun, provides us with coffee throughout the calendar year.  This results in the cyclical variations in coffee offerings that you might find in your local coffee shop, particularly those offered as the guest filter or espresso.  If you haven’t tried these before instead of your normal order, take some time out to sample regional variations: you might just find something tastier than your current skinny flat white, with one sweetener. 🙂

What’s probably most interesting upon first glance at the table above are some of the most calendar-prolific coffee growing regions that you might not have even known, like Congo and Tanzania, who produce coffee almost all year round individually.  Perhaps even more surprising is Brazil, the largest coffee producing nation in the world that accounts for around a third of production globally, with one of the shortest coffee production windows; just four months between May and August.  That’s a lot of coffee in such a short space of time!

Green coffee, once processed and imported, can sometimes last years but is at its peak within the first year of harvest.  After this time, the flavours become muted and in the worst case scenario, the coffee can actually begin to decay and rot, leading to fermented flavours in the cup.  Not nice!

Now, if you imagine that commercial coffees including the big and famous Italian coffee brands often have their roasted coffee on shelves for months, and sometimes years — even when the optimal window for consuming it is within 4 weeks after roast — how old do you think the green coffee might have been before it was even roasted?

With a lack of transparency from the big corporations, you as the customer should demand more!  At Long & Short, our stocked green speciality coffees are usually just a few months old and none older than 12 months.  Those that are older will be found in clearance sales we’ll hold from time to time and you can keep updated on our newsletter.

Keep an eye on the above schedule throughout the year and you’ll know what regions to look out for in future.

We use cookies for analytics and coffee alerts. By proceeding you agree you're happy with that.I agreeNoPrivacy policy