Out of all the ways we can brew coffee, a piece of kit that I will always cherish is and always will be the cafetiere/french press. It may not be the best for quality in cup but ‘s the first brewer that introduced me to coffee at home (regardless of being speciality) and I associate it with sentimental family gatherings growing up. Even to this day it still plays a regular role in my coffee drinking routine, which is why I want to pay homage to this classic kitchen brewer staple.

The cafetière is known by a number of names including french press, coffee plunger, plunge pot and coffee press and its creation dates back to the 1920’s in France, where it was made by attaching a metal or cheesecloth screen to a rod which was then plunged into boiling water to filter the coffee. The first patent of these designs was made by Milanese born designer Attilio Calimani, but its design would be perfected over time with a number of upgrades by Faliero Bondanini who would later patent his own version in 1958. Its current design now consists of a cylindrical beaker with lid attachment that holds a rod with metal mesh filter on the end. The rod and filter fit tightly within the beaker and are used to filter coffee grounds from the water by pulling then pushing the filter up then down. 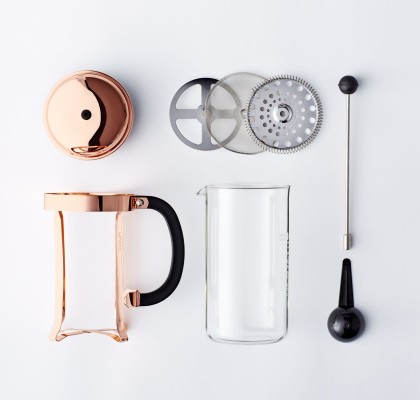 How the Cafetiere became the unsung hero

So now you know why the cafetière is probably the most widely used home brew method for fresh coffee. So for those seeking a fuller body and bold cup of coffee look no further. All hail the cafetière as the ultimate all round brewer!