Following a friends recent and enviable travels to Vietnam (…damn you Tobythelastviking!), a drink that has been raved to me more than once is Vietnam’s egg coffee, also known as Cà Phê Trứng. As a staple in many coffee shops in riddling the streets of its birth place of Hai Noi, its reputation precedes it as a coffee beverage that is both creamy and sweet….and with those inherent flavours began my journey to entertain this national delicacy.

I’m no stranger to egg coffees with Sweden also having its own interpretation, but regardless the thought of drinking egg can instill sceptisim within the best of us. Its saving grace for me was my obsession with Eggnog over Christmas, so who am I or you to judge it can’t taste good? But for those needing more persuasion let us continue…

The Vietnamese coffee scene is quite a unique one of which the people live and breath. Coffee shops are as common as bars in the UK but where coffee is considered a morning to day time ritual in Western cultures, in Vietnam it is consumed from day to night without hesitation. Whether that results in sleepless nights I have no idea, but the main take from this is it is a serious part of Vietnam life. Furthermore as the worlds biggest exporter of Robusta beans (although not my favoured bean) it plays an integral part of Vietnams economy. 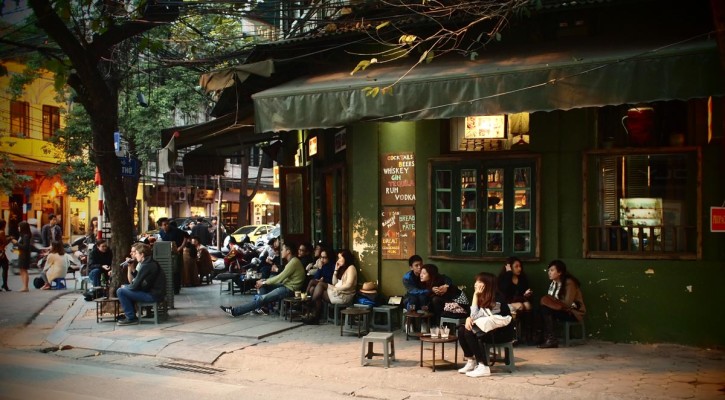 Coffee was first introduced to Vietnam through French colonialists bringing with them coffee beans, however it would be Vietnam that would later put their own stamp on its consumption. Not just about the coffee bean, Vietnam is home to a number of specialities that range from the Viet manual coffee filter named ‘Phin’, Viet Iced coffees that use condensed milk, Kopa Luwak coffee (find out my not so great thoughts about it here), as well as Viet egg coffee.

Although Vietnam’s fertile lands and tropical climates alone make it an ideal place to grow coffee, egg coffee was actually born out of Vietnams tough past and scarcely resourced population. With the struggle to source basic rations such as milk (a key ingredient in traditional coffees), whisked egg yolks would later be used as a replacement that combined with condensed milk would start the trend of the ultimate egg coffee.

The Vietnamese egg coffee recipe is a simple concoction, but one that packs a lot of flavour and textures commonly compared to a sort of liquid tiramisu. So for those adventurists amongst us I give you the recipe that made me a egg coffee convert. May it serve you well.

Each to their own with this one. I tend to brew up a filter coffee, but for a stronger alternative a double shot Espresso can be used.

Crack an egg open, remove the egg whites and whisk whilst adding a tablespoon of brewed coffee and 2 teaspoons of condensed milk. Whisk to a consistency of thick foamy cream.

Add the black coffee into a aesthetically pleasing glass and pour over the egg cream topping. For extra appeal you can garnish with chocolate powder.

For slow sippers and a more authentic experience you can put the glass into a small bowl of hot water to keep warm.