The Aeropress is a unique piece of brew kit: compact for on the go, affordable for easy access, one of the fastest filter brew methods, and sturdy in design.  But which makes the better cup of speciality coffee: the Upright or Inverted method?

I consider the Aeropress the Swiss army knife of coffee filter brewers.  You can grab an Aeropress on our site if you don’t own one already.  There’s even a travel-sized Aeropress kit called the Aeropress Go if you need one while travelling.

It is unique in that it allows you to brew in different ways. The Aeropress allows you to make a poor man’s espresso all the way to a sublime filter coffee. Multi functional in design it is most definitely not a one trick pony. You can even mod the Aeropress to your own needs. These can comprise of upgrades like the use of metal mesh filters or mods like the Prismo to turbo charge your Aeropress Espresso game.

However, there are two primary methods when using an Aeropress that don’t require add ons.  These are the Upright and Inverted brew methods. 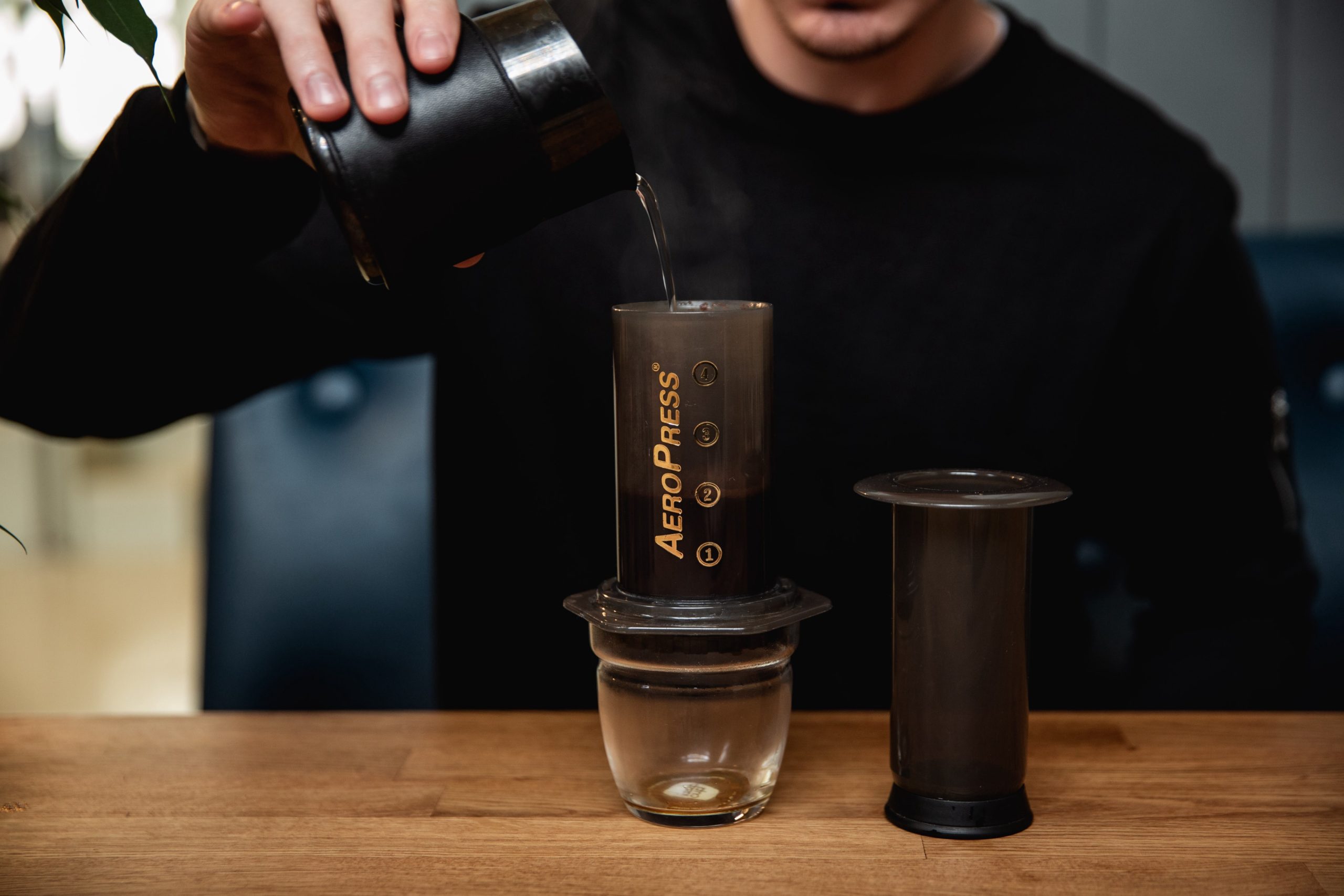 The Upright brew is the classic method.

Coffee grounds and then hot water is added. A stir can also be added at this point. (We aren’t huge fans of agitation, but that’s another post!)

Next, the top cylinder is attached and pushed down slowly. This forces the water through the coffee, similar to how hot water runs through a coffee puck when making Espresso. Take a look at the example video below by Gwilym Davies.

The main reason for using this method is because it’s logical and straightforward; you would probably use this method automatically without any instructions.

However, coffee may begin to trickle through since the pressure is being placed downwards upon the paper from the beginning.  Essentially, this trickle could mean slightly under-extracted liquid is placed into the cup below, although, this can also be considered similar to the early drips one might find on a V60 or Chemex.

Let’s start with how this method works.

To begin with turn the Aeropress upside down, without the filter paper or lid. Add the coffee and hot water for steeping: just the same as the Upright method. Again, depending on your recipe and opinion on agitation, the grounds and water can then be stirred. 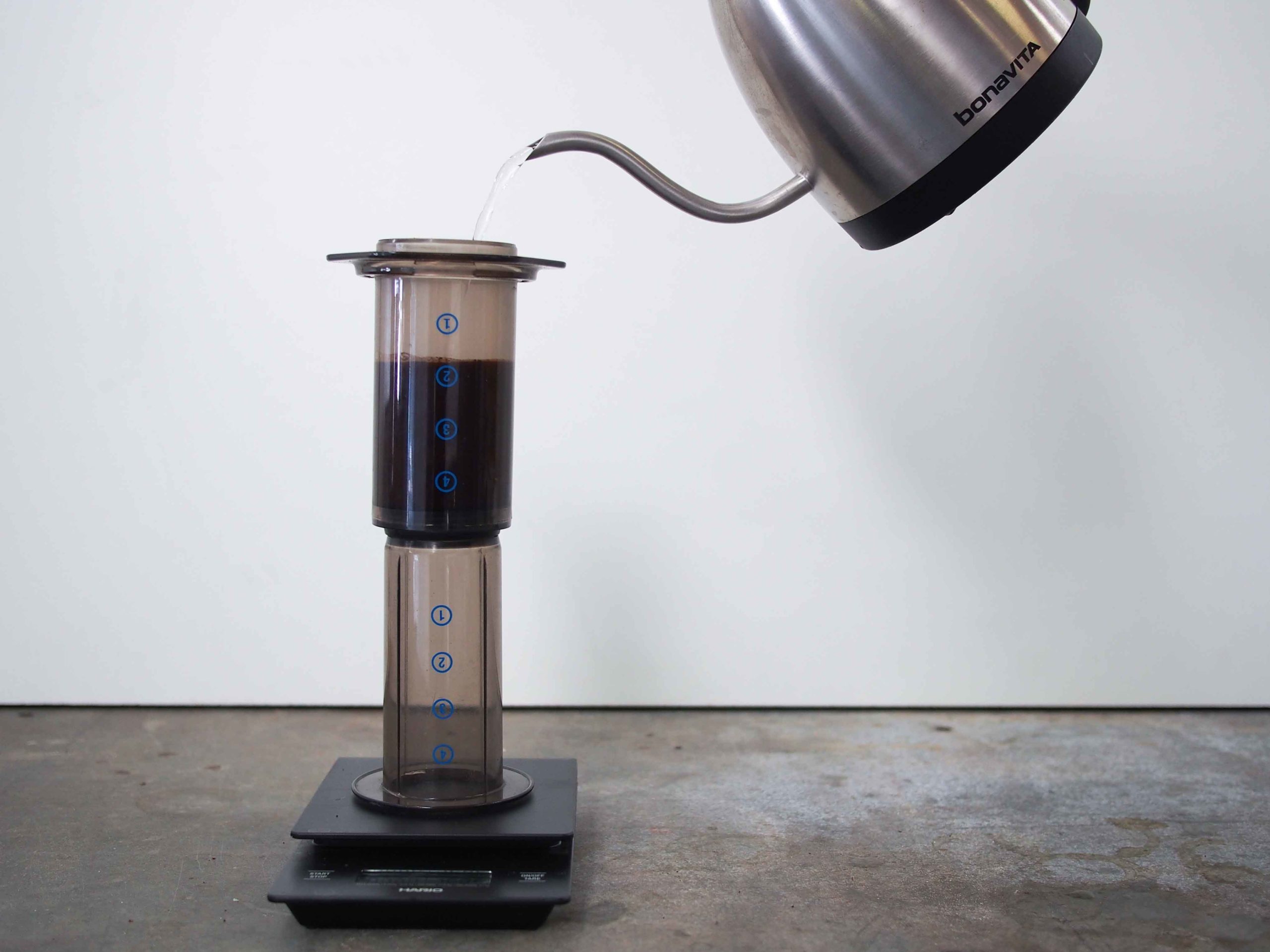 Next, the tricky bit: after the brewing time is up, and after wetting the paper and attaching the lid, turn the Aeropress upside down on the cup.  Take care, this step can cause a mess.  It needs a short, sharp action and may take a little practice.

Finally, press the Aeropress down slowly once again.  Below is another example video with the 2015 World Aeropress Champion, Lukas Zahradnik.

Obviously, the first characteristic of using the inverted method is that you avoid the early drip from the upright method.  Its focus is on the immersion portion of the brew, so is more closely related to the cafetiere or french press.

However, compared to the cafetiere and french press, the paper filter will provide more clarity of flavour, and less body.

Lastly, the inversion before finally pushing down the pump means additional agitation. Depending on your recipe, you may find this to be be beneficial, or not.

At the World Aeropress Championships (yes it is a thing) there’s a constant battle to see which of these methods prevails.

In 2017 Paulina Mickza​ won the championship using the Inverted method.  However, Jeongsu Parks closely followed in second place with the Upright method.

What this highlights is there is merit in both methods but there is no clear winner.  It comes down to preference and the only way you’ll truly know is by trying both methods for yourself.

What I love about the Aeropress is that for third wave coffee, it’s a tool that enables you to strive to make great coffee by exploring different techniques to bring different results. As with life it’s the journey and not always the destination that is rewarding.  Like the Aeropress, the journey is in finding a great method and recipe that rewards you with great coffee.

And on that note I offer you the World Aeropress Championship recipes. Who knows, maybe you’ll find a recipe worthy of entering the next championship.