When I first got into coffee choosing my initial home brew method was a big deal. For me I wanted one that was easy to use, produced good coffee and was value for money.

Whilst I ended up with the great Hario V60, if I had to make the decision again I would’ve been split with the Clever Dripper. In recognition of this I’ve decided to give this wondrous brewer a dedicated post to give it the lime light it so greatly deserves. Unraveling why it brews like the best of them and deserves an honourable mention.

How the Clever Dripper became so

The Clever Drippers beginnings are one shrouded in mystery, which may be a big reason why it’s not become as mainstream as other brew methods. Who invented the Clever dripper? When was it invented? Where did it come from? All valid questions and all very unclear. Other than first appearing in the early 2000’s it may have as well been a brewing gift from the gods. 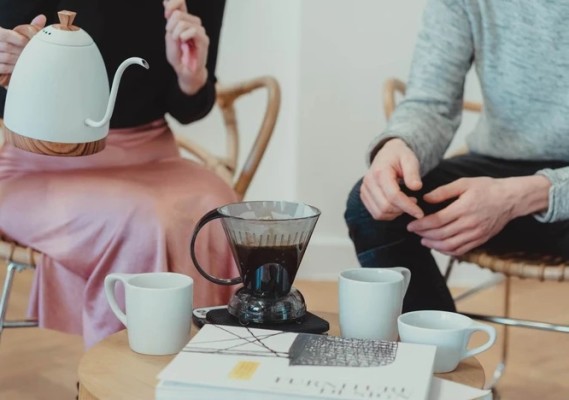 Why the Clever dripper is…clever?

Despite its lost cause of an origin story the Clever Dripper as a brewer is not one to be underestimated. I can only imagine when its light bulb of a moment ‘Clever’ name was formed. I give a run down of how it fairs for key areas when purchasing any brewer.

Filter coffee brewing can fall into 2 main categories. On one side immersion brewing (involving coffee being immersed in water for extraction) and conversely pour over (whereby water is poured through coffee grounds to extract the coffee). Pour over in general is a more hands on approach. It requires managing more variables including water flow rate, volume of pours, number of pours and so on. To some this may mean more control, but for others be an added complication of brewing. This could easily sway people to immersion brewing, which the Clever Dripper expands upon for its ease of use.

All on top of the simplicity of immersion brewing. Once you have the speciality coffee beans on lock, the main variables to adjust when brewing are the grind size, coffee to water ratio, brew time and water quality. Bish Bash Bosh…Brew.

Immersion brewers have in their long history not always been associated with quality. Brewing involves a pool of coffee and water for extraction that naturally produces a fuller bodied coffee. This is due to a higher and prolonged surface contact between the coffee and water.

This in some ways was tainted in its humble beginning due to the god father method of home brewing, the french press/cafetiere. This method produces a bold strong full bodied hit of coffee. Largely due to immersion brewing, but also because it uses mesh filters that leave remnants of coffee microbes within the coffee. This can easily result in a heavier and/or overly extracted cloudy hit of coffee as it continues to brew even after the coffee is supposedly ready.

The Clever dipper avoids this issue by using paper filters, which brings out a higher clarity in cup with a more balanced body. Although I hold the french press in high respect, the Clever Dripper produces a far better quality coffee as a result. That’s not to say other immersion brewers are great and use paper filters. The Aeropress is another great example of immersion brewing. Nevertheless the Clever dripper competes in other ways for sure, which brings me on to its final selling point.

The Clever Dripper is great value for money. If you do decide immersion brewing is the right method for you, the Clever dripper is super easy to use, produces good quality coffee for an immersion brewer and is also cheap for what it is. It’s well positioned to be a great all round immersion brewer. Priced at around £20 it substantially undercuts the Aeropress at around £30. As Aeropress lovers begin to scream…I will add the Aeropress is one of the most versatile brew methods in terms of uses and recipes. Hands down no other brewer can produce Espresseque and filter coffee alike. Never the less, for someone new to brewing speciality coffee who favours simplicity the Clever Dripper shines bright.

As with any brewer perfection is hard to come by and often a moving target. The Clever Coffee Dripper although exceptional in some areas is no exception. As a result, please see a summary of the positives and negatives below.

Closing thoughts of the Clever Dripper

I like my brew methods in all their different shapes and sizes. Whilst I don’t want this to come as a sales pitch, I don’t want the Clever Dripper to be added to a long and lost list of brew methods that never reached their potential. The Clever Dripper is ultimately a great brew method, particularly for beginners and if you enjoy fuller bodied coffees with medium clarity. Whether you’re a coffee drinker new to brewing at home or an experienced one looking for another way to enjoy coffee, you should spare a thought for the Clever Coffee Dripper.

I personally would’ve liked to use this method earlier in my coffee journey as a great gateway brewer to speciality coffee. If you’re lucky enough to have one or are considering, you can shop the Clever Dripper here and check out our Clever Dripper brew guide for beginners.

2 thoughts on “Clever Dripper : The Review”